Georgia Tech-Lorraine is becoming a new home for our new blogger, Sam. He’s had lots of adventures – and steak and mushrooms – while figuring things out. What lessons has he learned along the way? Check out his new blog post.

Hi Everyone! It’s Sam again, this time writing to you from my cozy little dorm in Metz, France (which, as I learned in the very first orientation meeting, is actually pronounced “Mess,” hence the clever blog post title)! I flew into France on January eighth, and since then, have kind of figured out the bus system, learned how to say please, thank you, and various items of food in French, and I even went grocery shopping a couple of times! *Applause, applause* 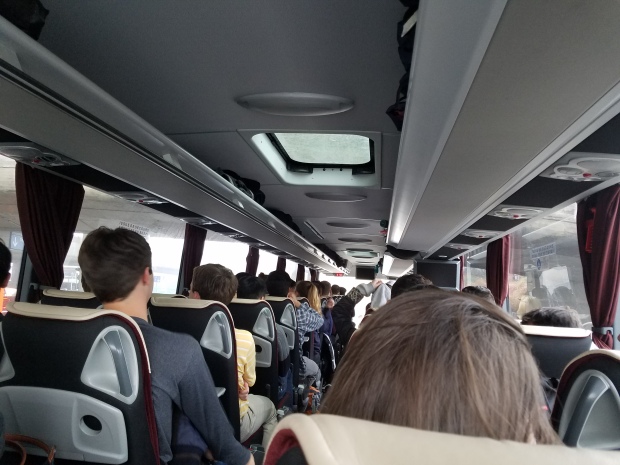 The shuttle! Note to self: next time you decide to ride in the back of a bus, take some motion sickness medication beforehand!

While I was waiting for the day to come when I would leave my comfortable, American dwelling, I got really nervous about the idea of living in a foreign country without a basic grip on the language or culture. Well, Christmas and New Year’s came and went, and it seemed like January eighth came rushing towards me at high speeds without so much as a warning. That day, I spent nine hours on a plane, four hours on a cramped shuttle, and I had the rest of the time to lie in my new bed and sleep off the jet lag. :’) I already knew two of the other GTL students, Adam and Lina, before this new adventure, and since our arrival, have become closer friends with them and some other students.

With that, here is a short recap of my first week living in France! 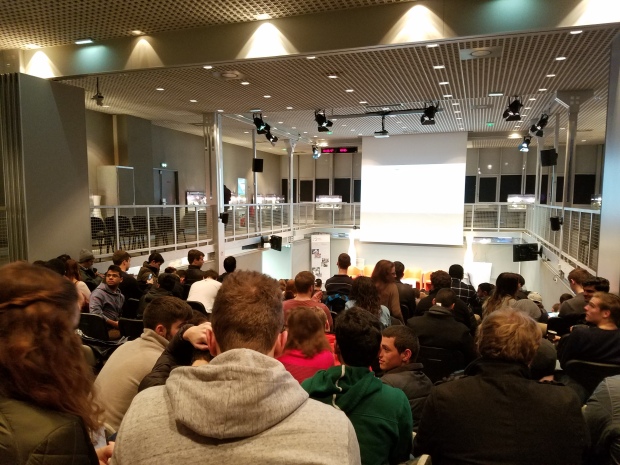 A picture from the GTL orientation on Tuesday.

Monday was my first day of classes, and I was already looking forward to the courses I have this semester. I spent about half the day in classes, and the other half at home, unpacking and getting everything set up. The new student orientation for GTL was on Tuesday, and later that day some friends and I explored a little bit around campus. It wasn’t long before we found ourselves at a huge grocery store that loosely resembled Walmart, which, if I’m being completely honest, made me feel a little more at home! Here’s a little pro tip for when you’re grocery shopping in France, or really anywhere: don’t buy a giant pack of steaks just because it is only five euros – THERE IS A REASON IT IS ONLY FIVE EUROS!

By Wednesday, I started to get the hang of things around campus. I had figured out where the cafeteria building is, and I didn’t get lost that day either! That day, my breakfast and dinner consisted of steak and mushrooms. So did Thursday, Friday, and Saturday’s meals.

On Thursday I became very aware of the fact  that I hadn’t actually ever taken a public transportation bus in my whole nineteen years of living. That, to say the least, was a bit of a nerve wracking realization, seeing as now I had to do everything for the first time in a language in which the only full sentence I had memorized was ‘the boys eat the apple’. Shout out to Duolingo for this incredibly useful information. I eventually got over my fear of buying the wrong bus pass and went over to the little ticket machine to find out that there is actually an English option! It was a blessing from God. Friday rolled around and I went to the store again to finally buy some spices so that I wasn’t just eating salted steak and mushrooms, but salted steak and mushrooms with garlic and onion and chili powder! I consider myself a seasoned chef these days.

And finally, this weekend was spent catching up on sleep, finishing homework, and visiting an old high school friend who lives not too far away from campus. I went grocery shopping again, but this time, I bought reasonable amounts of food so that I wouldn’t be eating the same thing every day of the week. I also bought plenty of garbage bags and plastic wrap- two essential household items I highly recommend stocking up on!

And here’s a new segment I call ‘French Word Of The Week’ to leave you feeling a little smarter than you were five minutes ago:

Example in a Frenglish conversation-

Adam: “Hey, what did you have for breakfast this morning?”

Sam: “Pain.”
Until next time, have a wonderful week, and be sure to try some fresh ‘pain’ if ever you find yourself in Europe!