Oktoberfest is a local German festival held in Bavaria, Germany. The festival origins come from a celebration of the marriage between King Louis I and Princess Therese von Sachsen-Hildburghausen. While many regional festivals happen throughout the state, the main Oktoberfest happens in Munich at the end of September and early October. I had the opportunity to be guided through a regional Oktoberfest in Regensburg, Germany this past weekend by a native German. I will share some tips and tricks to make the most out of your time there!

The most recognizable Oktoberfest tradition is the clothing. For men, one must dawn lederhosen (translates to leather pants) and a button up checkered shirt. Vests are also very common with plain button up shirts. Wool socks that stretch over the calves are common too!

For women, dirndls are the traditional women’s dress which consists of a blouse, dress, and apron. I will give a warning, quality dirndls will cost on the order of €100-200! In Munich, there are a couple of clothing stores that will sell lower quality ones or rent a much nicer one for €50. If you attend a smaller regional Oktoberfest, there will not be options for lower quality ones. You also don’t have to wear one if you are uncomfortable with it; women wearing lederhosen is perfectly acceptable too!

Finally, you may see people walking around with clothespins on their shirts and blouses. These custom clips, called “Glubbal”, are engraved with sayings or nicknames of the wearer. They can be made and purchased at stores near the festivals.

Bavaria, Germany in German is “Bayern, Deutschland”. Bavaria is located in the south-east corner of Germany and is the largest German state by land mass. One of the major cities in Bavaria is Munich or “München” in German.

One of the main festivities of Oktoberfest are the Tents: large tents with live music and drinks. Upon entering a tent, locate an empty table. When the band starts, stand up on the benches: this will be your place for the next hour as you sing and dance along to the music.

While most of the songs that played were completely in German, including the Oktoberfest hit “Bayern, Des Samma Mia” (translates to “Bavarians, That’s What We Are”), usually the bands will interlace English songs as well. Some examples include “Don’t Stop Believing”, the “Cotton Eye Joe”, and even “I’m Blue”!

In Bavaria, FC Bayern is the most popular football club. Often times, the White Stripes’ “Seven Nation Army” starts getting sung on stage and FC Bayern’s football chants get started in the crowd. It really is a sight to be seen, and is a cool connection to sports culture all around the world. 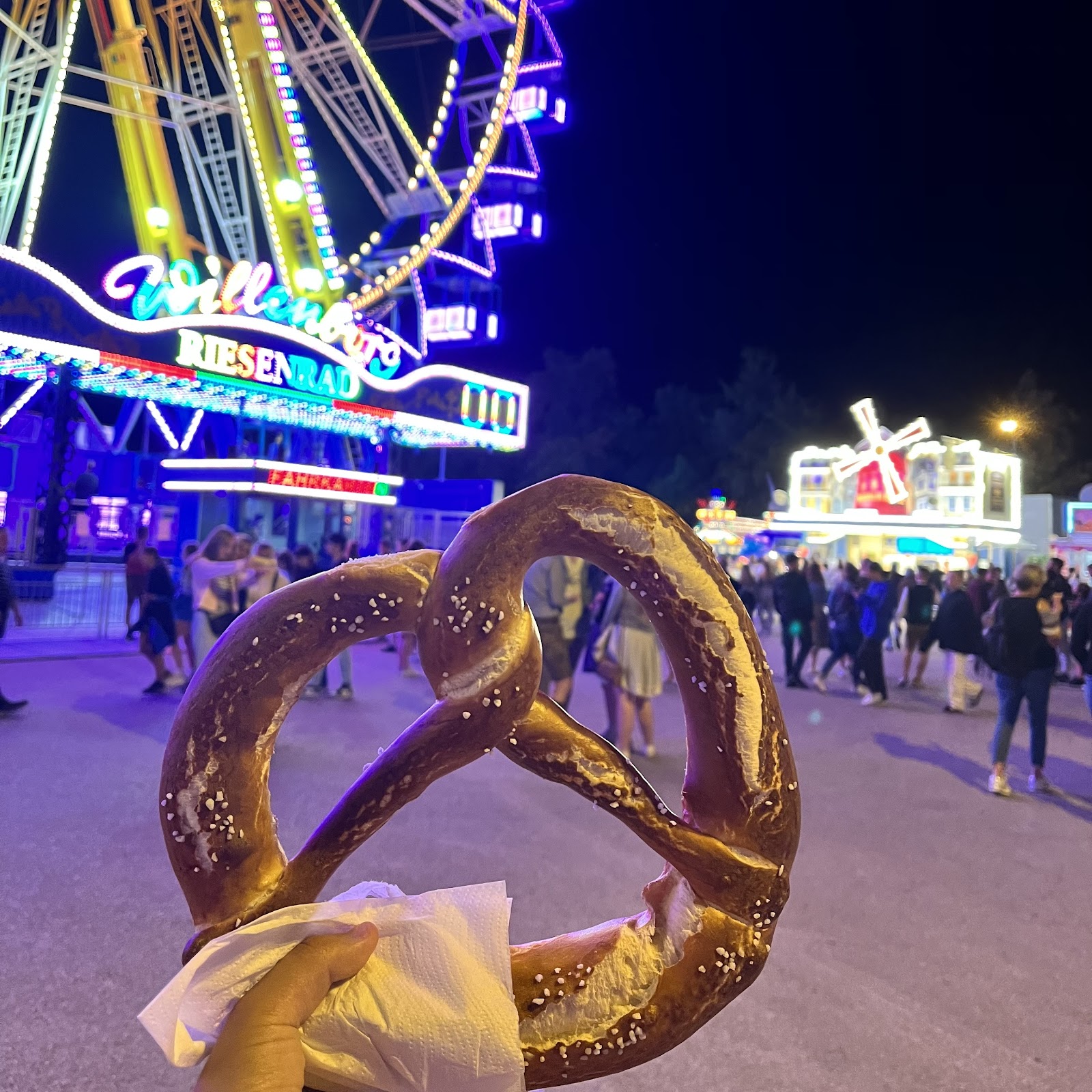 A giant pretzel in front of the Ferris Wheel.

Some of the most iconic foods you can find at Oktoberfest are pretzels, gingerbread, and meat. Gingerbreads are usually sold in a heart shape with sayings such as “Ich liebe dich” (translates to “I love you”). These gingerbreads are bought for your significant other to wear around their neck for the entirety of the festival. They can also last quite a while after; most people keep them as souvenirs instead of eating them! You can also find a lot of meat at festivals such as bratwurst and schnitzel. The menus tend to offer portions of some animal (i.e 1/2 a chicken, 1/4 of a duck, etc.), so vegans and vegetarians beware!

The leg of a pig and a Kartoffelklöße (potato dumpling). In Germany, dumplings are not filled with anything, and instead are giant gnocchi like spheres.

Overall, my time in Germany was one to remember. I highly recommend you try and attend a local festival since they are much more rich with German culture, less touristy, and cheaper than the main festival in Munich. The one I went to was filled with college aged students too! Overall, it was very fun to experience a small snippet of German culture at Oktoberfest, and I recommend the experience for anyone coming to GTL in the Fall!